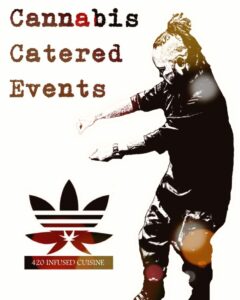 CANNABIS CATERED EVENTS is headlined by Chef FLiPfantabulas aka Rudy Sta Ana whom recently has just been appointed Admin of the Southern California area for the Canna Chef Union. In just a short period of time Chef FLiPfantabulas has managed to break into the scene and create a name for himself. Although he has had a few brief stints at Manila West in West Covina and Thai Lotus in Corona, he really is more self-taught then anything. And what Rudy might lack in training, he makes up for it with his creativity and passion for cooking anything from Filipino, to Thai, Chinese, Italian, American, and Mexican FUSIONS, especially when he gets to ehance his dishes with Cannabis Pairings or via Infusions. People have really been raving about his Medicated Thin-Crust Pizzas, he currently has a “Chicken Alfredo“, “Philly Cheesesteak“, & his most popular one is my favorite the “ELOTE Pizza topped w/ Hot Cheetos“.
Cannabis Catered Events has recently been receiving great feedback for their “CHEF STATION BITES” events, which features 6-Chef Pop-up Stations and each Chef makes 2-Gourmet BITES each. And ofcourse, Chef FLiPfantabulas has been one of the standouts with his “LUMPIA“(Filipino eggrolls), “ADOBO TACOS“, & his Signature fusion dish “TOM YUM VERMICELLI topped with Braised PORK BELLY”

Proudly brought to you by BuddyForms
Los Angeles CA